If you were asked to think of words to describe my crafts, I doubt you would put "funky" or "modern" on the list.  In fact, people have often said that I should have lived a hundred years ago, and a friend of mine nicknamed me 1950's ...here is an example of why... 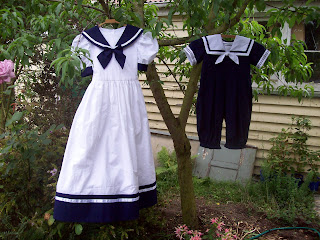 I just made these gorgeous sailor suits for my kids.  I love them, and I think the classic style is timeless.  But funky and modern they are not!

The dress is actually Miss Missy's third sailor dress.  I bought the first one second hand, and she wore it when she was around 9 to 18 months.  I remember her wearing it before she could walk, and that was when she developed her bum shuffle to get about :-)

I made the second sailor dress when Miss Missy was 2.  It is my take on a pattern from a copy of Australian Smocking and Embroidery magazine.  I also made one in reverse colours for my Goddaughter.  They looked truly adorable!  Miss Missy loved her dress so much that I let the hem down and added a bit of lace to make it longer, and although it is a size 3, she was still wearing it at age 6!  Eventually, though, we had to accept that it was just too small.

And from then on, Miss Missy started begging me to make her a new one.

Well, there aren't any patterns for sailor dresses in size 9 that I have seen!  So that's when I had to get creative.  I started with my sketches, and adapted bits from several different patterns to get the look I wanted.  One pattern for the bodice, another for the sleeves, another for the collar...you get the picture.  (I've never taken any pattern draughting courses, so I always use commercial patterns as a starting off point)  To get the collar right, I cut collar pieces from scrap fabric, pinned them to the bodice, had Miss Missy try it on, and then drew seam lines and cutting lines on with a pencil.  I feel really proud of how it turned out, and Miss Missy is so happy with her new dress! 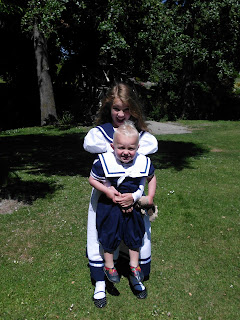 Well, I couldn't leave out the Young Lad.  That old smocking magazine also has a pattern for a boys romper, and ever since the Young Lad was just a tiny Lad, I'd been thinking how lovely it would be to make it for him.  But I procrastinated making it so long, that he outgrew the pattern!  And to be perfectly frank, I wasn't really sure if that romper would really work on a boy.  It has puff sleeves and it's very full...it's really just a step too far.  So, I decided to use the top half of the girls pattern (which funnily enough is actually less feminine that the boys pattern...go figure!) and have pleats rather than smocking and gathers.  I also hunted down grossgrain ribbon to use instead of satin (because grossgrain ribbon is so much more manly, of course!)  I had a bit of a panic when I had almost finished and I realised that I had somehow misjudged the length, and made it too small!  But luckily I thought of undoing the bands at the crotch, and by using the dome tape like a facing, I was able to lengthen it and make it big enough to fit for the summer at least, I hope.

I managed to finish the outfits just in time for the kids to wear them when Mr K and I renewed our vows on Christmas Eve.  And two different people stopped and said how beautiful the children looked! 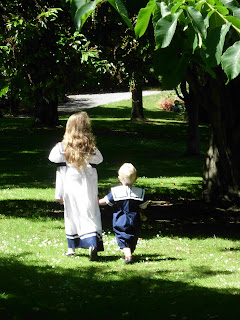 Welcome to BKrafty - the blog of BK Crafts and Keystones

Well, I have decided to create a blog for those times when a status update just isn't big enough to say everything that's on my mind, and having spent the day mucking about and making it look pretty, I thought I should just go ahead and post something!

Thanks for stopping by, I hope you'll come along for the journey :)
Posted by Bronwen @ BK Crafts at 21:00 2 comments:

Bronwen @ BK Crafts
I'm Bronwen. I'm a Mum of two, and I'm studying to be a librarian. In my spare time I like to make stuff.

Promote your Page too

something to talk about